Johnson, a Light Weapons Infantryman, was assigned to the 23rd Infantry Regiment, 2nd Infantry Division.  The 2nd Infantry's acting commander, seriously underestimated the strength of the North Korean position along a seven mile long hill mass and ordered a single infantry regiment - the 23rd - and its attached French battalion to make what proved to be an ill-conceived assault starlight up Heartbreak's heavily fortified slopes.

The attack began on September 13, 1951 and quickly deteriorated into a familiar pattern.  First, American aircraft, tanks and artillery would pummel the ridge for hours turning the barren hillside in a cratered moonscape, followed by the 23rd's infantrymen climbing the rocky s;p[es taking out one enemy bunker after another by direct assault.  Those who survived to reach the crest were exhausted and low on ammunition.  The North Koreans counterattacked repeatedly and mostly at night by fresh troops they were able to bring up from neighboring hills.

The battle went on for two weeks - the fighting was savage and the ridgeline (called Heartbreak Ridge by the American infantrymen) changed hands many times in the exhausting series of attacks and counterattacks. 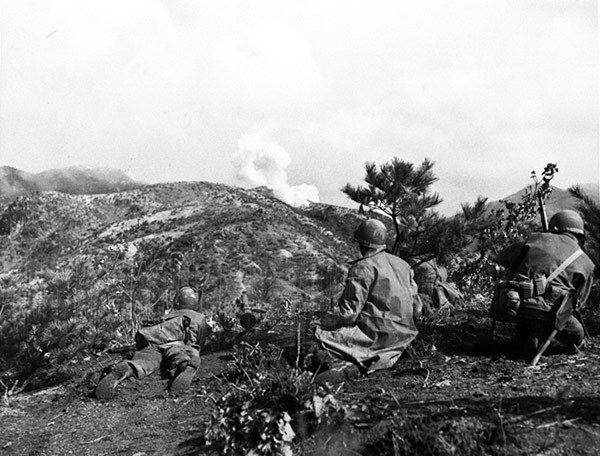