This war began on April 21, 1898 with Americans siding with Cubans who were under the thumb of the Spanish Government.  The Cubans who were fighting for their own independence were challenging Spain, who depended on Cuba for prestige and trade and also used it as a training ground for its army.  They (Spain) were not going to relinquish their foothold on Cuba

Tensions built as President McKinley urged patience, how the incident of the USS Maine changed that conversation.  McKinley had sent the USS Maine to Havana to ensure the safety of American citizens and interests (sugar and tobacco) and to underscore the need for social reform.  However, on February 15, 1898 the Maine sank in Havana Harbor after suffering a massive explosion.

3/4   of the ship's 355 sailors died as a result of this explosion.  Public opinion in the United States were riveted on the situation and when McKinley asked Congress to appropriate $50 million for defense, they unanimously obliged.  Spain, who was trying to avoid a war, appealed to the European powers , but most of them advised Spain to accept the US conditions for Cuba's independence.

When the US Navy's investigation proved that the USS Maine had been the victim of "deliberate destruction caused by a mine" war was inevitable.

By June 1898 the 1st Marine Battalion had landed at Fisherman's Point at Guantanamo Bay quickly followed by the 5th US Army.  The battles were fiercely fought - Battle of Manila Bay, Battle of Santiago, and the Battle of San Juan Hill.

In addition to the war injuries the American troops were also facing yellow fever, which was crippling their numbers.

Finally in August of 1898 evacuation began giving the United States the reputation of "defenders of democracy" .  It was 16 weeks of war in terrible unsanitary conditions and the losses of Americans were significant. 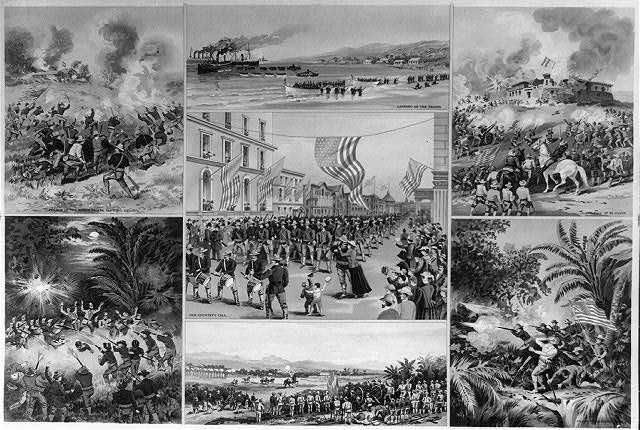