The soldiers of the 12th Infantry Regiment faced the constant challenges of triple canopy jungles, extreme heat and seasonal monsoons plus he assaults of the North Vietnamese and the Vietcong around the base of Camp Dau Tieng.

PFC King was killed in action on July 12, 1967.  He is buried in the Mountain View Cemetery, Mountain City, TN 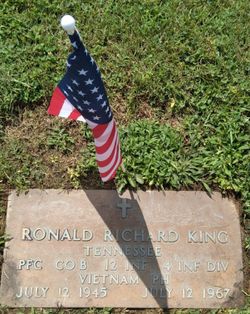