The Battle of Chosin Reservoir was a 17 day fight in freezing brutal weather in rough terrain.  30,000 United Nations troops were encircled and attacked by 120,000 Chinese.  The UN troops were able to breakout and made a fighting withdrawal to the port of Hungnam.  Heavy casualties were felt on both the Chinese and the UN troops. 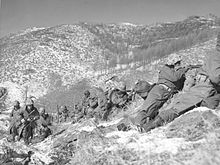