On November 26, 1943, the plane departed Molesworth, England and was on a bombardment mission to Bremen, Germany.  It was last seen 10 kilometers west of Texel Island, the Netherlands over the North Sea when it dropped out of formation with its wheels down.  It appeared to be under control when last seen.  The B-17 crashed at Den Heldeer, the Netherlands and all crewmembers were killed in action.  The aircraft carried a 10 man crew and S/Sgt May was the Ball Turret Gunner, as well as Assistant Radio Operator

S/Sgt May was awarded the Air Medal with 2 Oak Leaf Clusters and the Purple Heart. and is memorialized a the Cambidge American Cemetery, Cambridge, England. 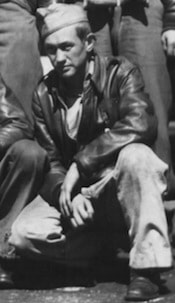 The position of Ball Turret Gunner required a man of small size because of the space, so it is assumed that this is S/Sgt May who is without a Mae West or parachute, as neither would fit into the Ball Turret.