PFC Gambill was assigned to the 3rd Engineer Combat Battalion, 24th Infantry Division.  The Division, part of
IX Corps, were tasked with conducting a counteroffensive on the Chinese.  They ran into heavy resistance in February and March 951 as they pushed the Chinese (PVA) north of the Han River.

They continued pressuring and advanced north of the 38th Parallel.  In April they launched a major counteracttack and were able to hold their ground against the PVA, but the North Koreans (ROK) were threatening to encircle the 24th, so they withdrew back to Seoul.

In June and again in September, the 24th, with other UN forces launched counteroffensives and advanced to the west of the Hwachon Reservoir.  Flanked by the ROK 2nd and 6th Armies, the 24th advanced past Kumwha engaging the PVA 20th and 27th Armies. 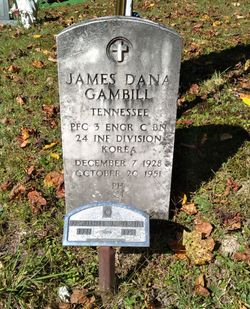