Harmon, who had worked for the WPA, enlisted in the Air Force December 15, 1941 and was attached to the 351st Bomber Group stationed at Leige, Germany.

On October 10, 1943 Harmon's aircraft a B-17F (Flying Fortress the "Venus") #4229868 was on a heavy bombardment mission to Ankam, Germany.  The aircraft was hit by a German Messershmitt 109 over the Baltic Sea.  The plane caught fire immediately and exploded in the air.  The Top Turret Gunner, Navigator, Bombardier and co-pilot bailed out.  A German boat picked up two of them fairly quickly, and continued to search for the others.  However no others were picked up.

In February,  1950 S/Sgt Harmon's body washed ashore and was recovered by the German customs guard and initally buried at Petersdorf Cemetery, Petersdorg, Germany.  S/Sgt Harmon had been the Right Waist Gunner.  Harmon was later moved to Bunton Cemetery in Johnson County, TN

S/Sgt Harmon had completed 18 successful missions.  He was awarded the Medal of Honor, Air Medal, and Purple Heart with Oak Leaf Cluster 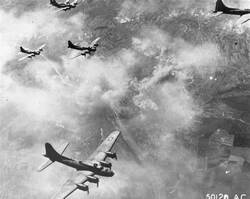 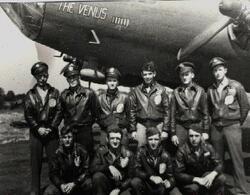