In June 1953, the 15th infantry Regiment was on a tiny hilltop - Outpost Harry -  in the "Iron Triangle" on the Korean Peninsula, approximately 60 miles northeast of Seoul and the most direct route to that capitol.

Since the outpost was defended each night by only a single company of American or Greek soldiers, the Chinese (PVA) had anticipated an easy capture.  Five companies  = 4 US and 1 Greek - alternated duty on Outpost Harry.  Over the next 8 days, repeated attacks by the PVA infantry were launched against the outpost.  Most of the fighting occurred at night under heavy mortar fire, while the daylight hours were usually spent evacuating the dead and wounded, replacing the defending company, sending up re-supplies and repairing the fortified positions - all while enduring artillery, mortar and sniper fire. 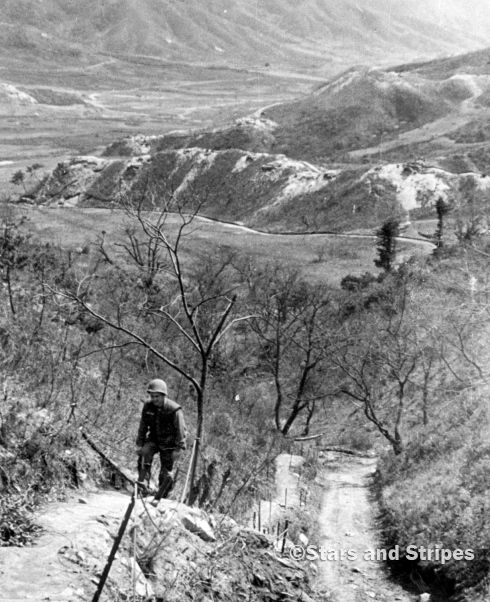 men of the 15th Infantry Regiment trudging up Outpost Harry