​Greene graduated from Johnson County High School, Mountain City, TN and worked at the A.C. Truss Company before joining the Army in May 2008.  After basic and advanced training he was assigned to the 16th Signal Company, while a member of the  510 Engineering Company, 20th Battalion, 36th Brigade based at Fort Hood, TX

On that thursday, November 5, 2009 at 1:34 Major Nidal Hassan entered the Soldier Readiness Processing Center, where personnel receive routine medical treatment immediately prior to and on return from deployment.

Hassan was preparing to deploy to Afghanistan and on that day appeared with 2 weapons - a FN five-seven pistol which he had fitted with two laser sights, and a Smith and Wesson .357 magnum revolver.  He asked to see a Major Parish who had been assisting Hassan with his deployment preparations and while waiting, was seen bowing his head for a few seconds before shouting "Allahu Akbar" and then opened fire, spraying bullets at soldiers in a fanlike motion.

​An Army Reserve Captain tried to stop Hassan by charging him, but was mortally wounded before reaching him - at the same time a civilian Physicians Assistant also charged Hassan with a chair but was shot and killed.  Another soldier threw a folding table at him, but was shot in the hip.  Spc Greene charged Hassan and was shot 12 times by Major Nidal Hassan.  Hassan killed 13 people and wounded 30.   His targets were soldiers in uniform who - in accordance with military policy - were not carrying personal firearms.

Civilian police officers finally brought Hassan down  and he was charged with 23 counts of premeditated murder and 32 counts of attempted murder.  He is a Muslim and was said to hold radical Islamic religious convictions.

In 2013, The Tennessee State Legislature passed Public Chapter NO. 482 which said the bridge spanning Goose reek on State Route 67 in Mountain City was designated the "Spc Frederick Greene Memorial Bridge" to honor his memory. 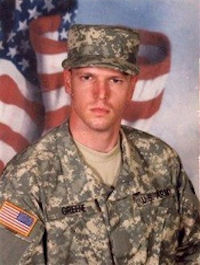