Grace was assigned to the 21st Infantry Regiment, 24th Infantry Division and in June 1950 was the first US division to respond to President Truman's intervention order to prevent the conquest of South Korea.  The North Koreans had overwhelmed the Republic of Korea Army (ROKA) and advanced south preparing to conquer the entire nation of Korea.  The 24th Division's first mission was to "take the initial shock" of the North Korean assault, trying to slow its advance until more US troops could arrive.

​The 24th Division was repeatedly defeated and pushed south by the North Koreans' superior numbers and equipment.  In August 1950 the 24th again engaged the North Koreans and were forced back.  The North Korean officers claimed that some UW soldiers were "too frightened to fight".  But the 24th managed to delay the advancing North Koreans for two days, long enough for significant numbers of US forces to arrive in Pusan establishing defenses further south.

With fresh numbers, the UN troops began to make progress - attacking Inchon from the rear in September which began a general counteroffensive northwards.  By mid October the North Koreans had been almost completely destroyed and President Truman ordered General MacArthur to advance into North Korea as quickly as possible to end the war.

In November 1950 the 21st Regiment had captured Chonggodo, 18 miles from the Yalu River and Korea's border with China.    Renewing their offensive, the UJN forces were stopped by the Chinese People's Volunteer Army (PVA).  Amid heavy casualties the US troops retreated from North Korea to the Imjim River, south of the 38th parallel.

It was during this offensive that Corp Grace was killed in action.  He was awarded the Purple Heart, Combat Infantrymans Badge, Korean Service Medal, United Nations Service Medal, National Defense Service Medal, Korean Presidential Unit Citation, and the Republic of Korea War Service Medal.  He is buried in the Peterson Cemetery, Unicoi, TN 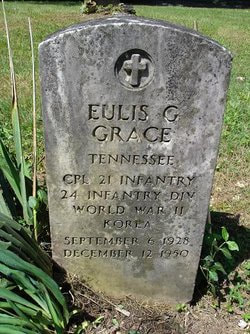